Japanese Swallowtail Angelfish (Buy Online) live up to their name with their long flowing colorful tails that resemble swallowtails as they swim through the water column in search of food. Plus, the Japanese Swallowtail Angelfish is a perfect choice for keeping in a reef tank with soft corals because this species has no interest in eating coral, nor does it nip at other invertebrates. 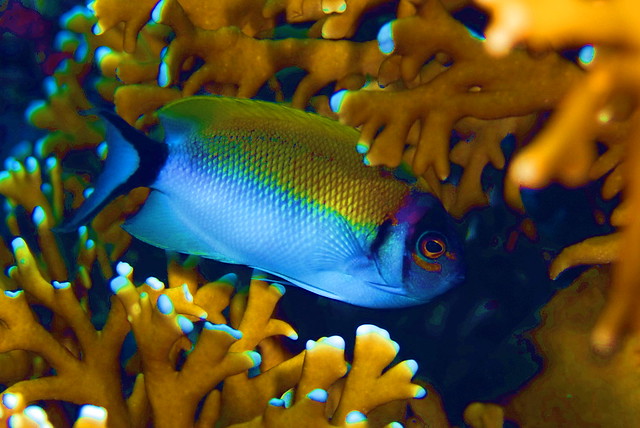 The Watanabei Angelfish (Buy Online) is a great option if you’re looking for a beautiful and peaceful angelfish to add to a community tank. These angels are reef safe and will not nip at soft and stony corals. They also have a calm temperament and are perfect for any 120+ gallon aquarium. Plus, with their striking pale blue body color and black lining, they are sure to add beauty and interest to your reef tank.

The Masked Swallowtail Angelfish (Buy Online) are reef safe and can grow up to 8 inches in length, making them a perfect choice for larger reef tanks. Females will have a more off-white color with yellow accents on the bottom half of their body that fades to black near their dorsal fin, while males will be more orange with black vertical striping. And while most angels do best when kept singly or as a mated pair this species is so peaceful you might be able to get away with keeping them in small groups. 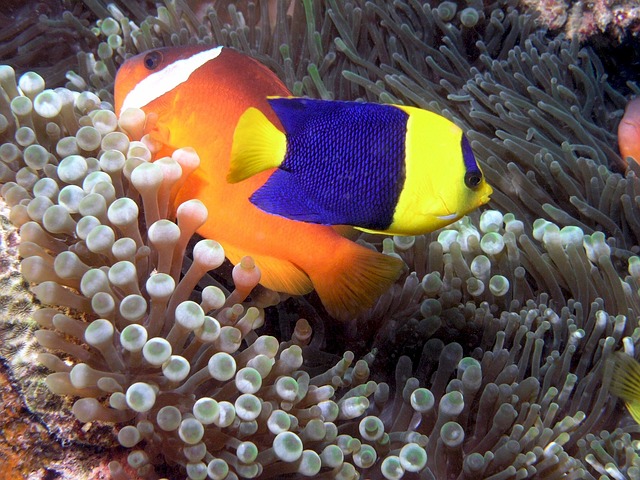 The Bicolor Angelfish (Buy Online) is a popular saltwater fish that is somewhat reef safe. They are known by many different names including Blue and Gold Angel, Pacific Rock Beauty, Oriole Angelfish, Two-Colored Angel, and the Oriole Dwarf Angel. They will reach a maximum length of 6 inches, and they need to be kept in at least a 75-gallon tank. Plus, the Bicolor Angelfish can be kept with other peaceful fish, but it should not be housed with any predatory species such as lionfish.

The Flameback Angelfish (Buy Online) is an attractive, hardy fish that can be kept in a 55-gallon tank. This beautiful fish has an orange and yellow dorsal fin with a striking body coloration with a clear tail. They are only somewhat reef safe since some individual fish will pick on coral and other invertebrates like snails, shrimp, anemones, and sea urchins. However, if you want to keep this type of angelfish in a reef tank you can provide them with more food options so they won’t be as likely to go after coral and any other small sessile invertebrates.

Flame Angelfish (Buy Online) are a beautiful addition to any saltwater aquarium. They are best kept singly, as they can be aggressive towards other Angelfish. However, they will do well with other fish that have similar care levels and diets. Just be sure to keep an eye on them when adding them to your tank, as some Flame Angelfish may nip at soft and stony polyp corals, invertebrates, and clams.

The Pygmy Angelfish (Buy Online) is a great choice for people looking to add more color and personality to their fish tank. It has the typical elongated shape of a dwarf angelfish, but with beautiful colors that will bring life into any aquarium. And while they are quite small these fish are very active, so they should be kept in a large 100+ gallon tank. They also are only partly reef safe since some individuals will pick at corals and other invertebrates, while also nipping at worms or clams if given the chance. 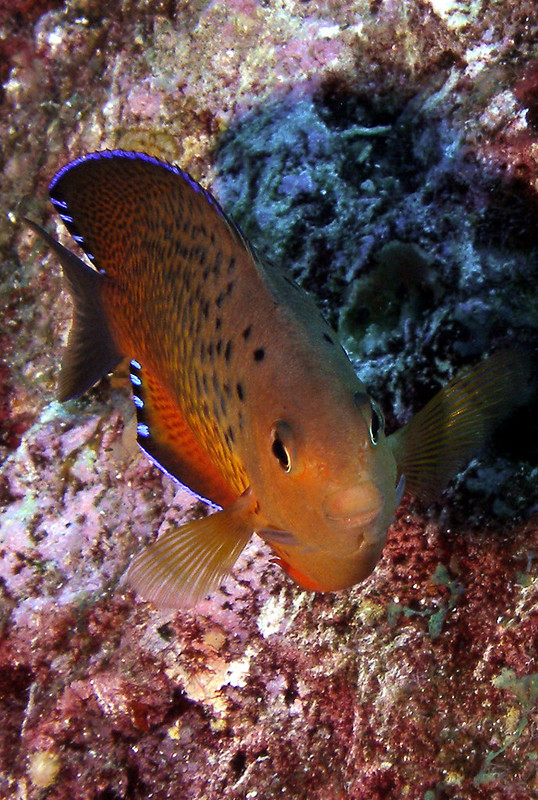 The Rusty Angelfish (Buy Online) is a gorgeous and unique fish, and if you’re looking for an angel that can add some color to your tank with its rust-red body and brilliant blue edging on its fins then this is a great choice. They should only be housed singly or in pairs but do well when kept with other non-aggressive species of fish. And they are only somewhat reef safe since some Rusty Angelfish will nip at soft corals if they are underfed. 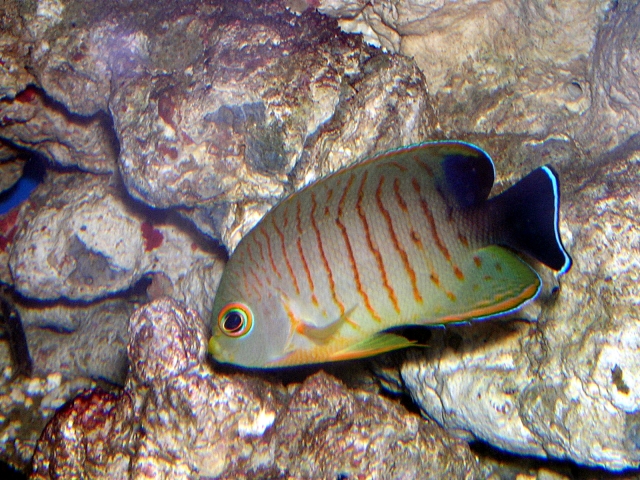 The Eibli Angelfish (Buy Online) is a beautiful fish that can be found in the Indo-Pacific. It has a unique multi-colored body and thrives best in tanks of at least 75 gallons with plenty of live rock and algae growth for grazing. Just be careful though as the Eibli Angel can nip at corals and small inverts, so they should be closely monitored when introduced into a reef tank.

The Cream Angelfish (Buy Online), is a beautiful fish that can be found in the wild throughout the Indo-Pacific region. This semi-aggressive omnivore requires a minimum tank size of 120 gallons and with proper care, the Cream Angelfish can reach up to 8 inches in length and it makes a stunning addition to any saltwater aquarium. However, some Cream Angelfish will nip at coral, so care should be taken when adding one to a reef tank.

The Multicolor Pygmy Angelfish (Buy Online) is a beautiful and peaceful fish. This species can be semi-aggressive to other angelfish in their tank but will thrive with other non-aggressive fish. However, they are only reef safe with caution since some individuals are prone to nipping at soft coral polyps and stony coral colonies so they should be monitored closely in a reef tank setting. 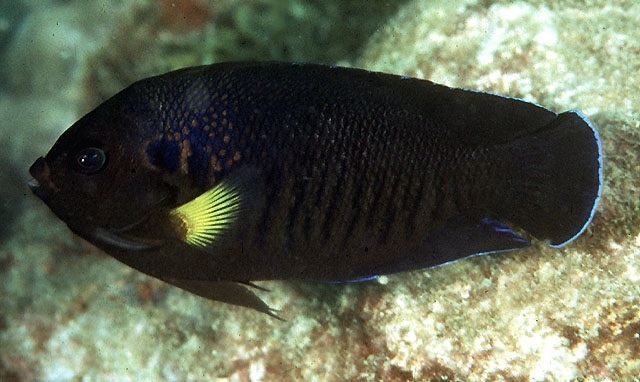 The Yellowfin Pygmy Angelfish (Buy Online) has a dark body featuring a yellow pectoral fin and blue highlights along its fins. Due to aggression towards other Angelfish, they are best kept singly but will do well with other fish. While this species is somewhat reef safe it should be monitored as it can nip at soft and stony polyp corals, invertebrates, and clams if it isn’t provided with a varied diet.

The White Tailed Pygmy Angelfish (Buy Online) is a beautiful species that will thrive in an aquarium with other fish. These fish can get up to 3 inches long and they need to be kept in at least a 55-gallon tank with ample space. They are omnivores, eating both plants as well as meaty foods like brine shrimp or frozen Mysis shrimp along with marine flake food, pellets, or any prepared fish food formulated specifically for angelfish. However, they are not completely reef safe and should be monitored closely for any aggressive behavior towards corals and invertebrates.

The Yellow Angelfish (Buy Online) is also known as the Yellow Pygmy Angelfish or Cherubfish and it is a small and distinctive type of angelfish that features a bright yellow body that makes them a great alternative to a yellow tang. They should be kept singly in an aquarium of 75 gallons or more, and their diet should include spirulina flakes to meet their nutritional needs. In addition, they are only somewhat reef safe since certain Yellow Angelfish will nip at soft corals and anemones.

The Black Angelfish (Buy Online) is a somewhat reef-safe Semi-Aggressive fish with an Omnivore diet. They are suitable for living in tanks larger than 70 gallons, and they can grow up to 4 inches long.

The Lamarck Angelfish (Buy Online) is a beautiful fish that can be kept in a reef tank with caution. They are peaceful fish and will do well in a school of females or as a mated pair. Males and females have the same coloring, so it is important to watch them closely to make sure they don’t fight. Plus, these Angelfish can grow up to 9 inches long, so they need to be kept in at least a 120-gallon tank to thrive.

The Blacktail Lemonpeel Hybrid Angelfish (Buy Online) is a beautiful fish that mixes the best of both worlds when it comes to color and temperament. While they are not as aggressive as some other angelfish, they still require a minimum tank size of 70 gallons and should only be kept with caution in reef tanks. But their bright colors make them a popular choice and their hardy nature means they can thrive in most home aquarium settings.

The Coral Beauty Angelfish (Buy Online) is a beautiful addition to any saltwater aquarium. They are somewhat reef safe and can be kept in smaller tanks, but they do best when they have some space to swim around (at least 70 gallons). Plus, these fish will do well with other fish, as long as it’s not another species of angelfish, and if you’re looking for a stunning saltwater fish with vibrant eye-catching colors, the Coral Beauty Angelfish might be perfect for your tank.

The Bluefin Pygmy Angelfish (Buy Online) is a beautiful addition to any saltwater aquarium. This fish is easy to care for and has a semi-aggressive temperament. They are omnivorous and will eat most types of food. And these angels can be kept in tanks as small as 70 gallons and they will not grow much larger than 6 inches.

Half Black Angelfish (Buy Online) are semi-aggressive fish that can grow up to 4 inches in size. They should be kept in tanks of at least 70 gallons and are reef safe with caution. However, they may not be the best choice for first-time aquarium owners, but if you’re up to the task of keeping them Half Black Angelfish make beautiful and interesting additions to any home aquarium.

The Midnight Angelfish (Buy Online) is a dark, almost black fish that’s sure to add drama and intrigue to your tank. This semi-aggressive fish can reach up to 4 inches in size and does best when housed in an aquarium of at least 70 gallons with plenty of hiding places. The Midnight Angelfish will eat almost anything you put in the tank, making it an easy fish to care for. While they are reef safe, caution should be taken as they may nip at corals and other invertebrates.

The Multi-Barred Angelfish (Buy Online) is a beautiful fish that can be kept in a reef tank with caution. They are expert-level fish and have a semi-aggressive temperament. Multi-Barred Angelfish reach a maximum size of 5 inches and have white bodies with thick black vertical striping. Their yellow underbellies make them easy to identify. And they should be fed an omnivorous diet and will do best in a tank size of at least 120 gallons.

Best Fish for a Small Tank without a Heater

If you’re looking for the best fish for a small tank without a heater, then you’re in luck because you have a lot of options. In the following article, we’ll review the eight best coldwater fish for small tanks that are readily available on the market.   You might also want to try out our […]