At some point in time, we have all felt our guinea pig vibrating or trembling. It usually occurs when we are petting or holding them. Vibrating is perfectly normal guinea pig behavior. But certain vibrations can be an indicator of their varied emotional states. So why do Guinea pigs vibrate?


Some people believe guinea pig vibrations are always a good sign, this may not always be the case. The following points will help you get a better understanding of why your guinea pig is vibrating in the first place.

Why do Guinea Pigs Vibrate 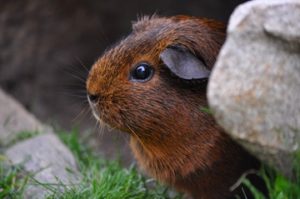 If a guinea pig is scared or fearful of a situation, it might cause them to vibrate. One kind of scenario where fearful vibrations may occur is when a guinea pig is being carried in your arms. Being high above the ground can be a very scary event for a small animal. Especially if they are not comfortable with the way they are being held.

Other times a guinea pig might vibrate in fear, is when they are being petted when they don’t want to be touched. This usually happens when they have already shown signs of not wanting to be touched, such as running away from your hand.

Another cause of fearful vibration is being in an unfamiliar location. If your guinea pig is in a location that they are not used to, like a new cage or new room, they might vibrate until they calm down. Guinea pigs are also sensitive to noise, so any loud jarring noises might cause them to vibrate. 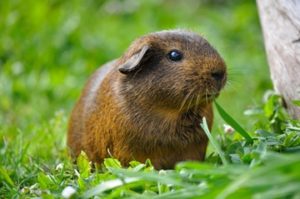 For the most part, guinea pigs are very gentle and docile pets, but all animals will defend themselves if pushed too far. Because fear can lead to aggression it is best to heed any fearful vibrations, before they escalate any further. The two main options an animal has when they feel threatened is fight or flight. And when your guinea pig is in a cage with limited options to run, fighting can sometimes be their last resort.

The way to tell if your guinea pig is about to become aggressive is to listen for tooth grinding. If your guinea pig has been fearfully vibrating for a period of time, but their message has not been received. They will begin to send out another warning by grinding their teeth. If this occurs be very gentle with the guinea pig and put them back in their cage. Or if they are already in the cage leave them alone for a while so they can calm down.

These signs of aggression can also occur between two guinea pigs that are fighting for territorial dominance. In these events the same process will take place first, the guinea pig will start to vibrate, then they will grind their teeth. If the other guinea pig doesn’t heed the warning, a full on fight might break out. 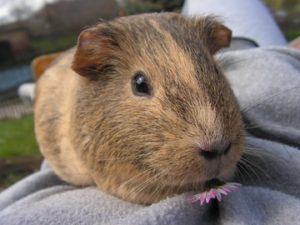 While most people like to think that all vibrations are just expressions of pure joy, as previously explained it can be more complicated than that. But if you know your guinea pig is comfortable and is not showing any signs of stress or aggression. You can be pretty sure that they are vibrating out of happiness.

A guinea pig is usually most comfortable when you are gently petting them, or when they are sitting on your lap. If the guinea pig is showing no signs of wanting to run away, and they are cuddling up to you. Then you can be pretty sure they are very satisfied with the attention they are receiving.

While most guinea pigs will calm down for a while, each guinea pig will have a different tolerance for how long they like being handled or held. Most guinea pigs enjoy being handled for a short time. After that, it is a good idea to return them back to the comfort and safety of their cage. As long as you pay attention to your guinea pigs needs, it is safe to assume any vibrations you feel are a good sign.

Since vibrations act as a means of communicating emotional states, it should be no surprise vibrations also play a role in courtship. When a male guinea pig wants to attract a mate, he will let out very gentle slow vibrations to draw the females attention. These vibrations will be accompanied by other classic guinea pig mating behaviors, such as circling and swaying of the hips.

Females may also vibrate during a courtship display, but this is less common than male vibrations. Usually, when a female vibrates in return, it means she is very open to mating with that specific male.

And one other reason a guinea pig might be vibrating or shaking is that they are simply cold. Just like all mammals, a guinea pig will respond to being cold by shivering. If you keep your guinea pig in a location that you know can get a little cold. Consider moving them to a warmer spot to see if it can reduce any temperature related shaking. Unlike rabbits and other small rodents, guinea pigs are not well adapted to the cold. So they should always be kept somewhere that stays above 65 degrees Fahrenheit throughout the year. 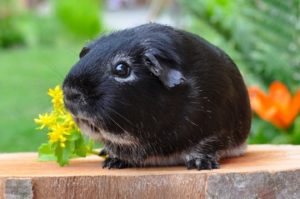 Just try to remember your guinea pig is a living animal, and just like a person they can go through changing moods. And while it might be easy to overlook the emotional state of your guinea pig. Always do your best to consider how your guinea pig feels, and try to cause them as little stress as possible.

Sometimes this might mean giving them space if they are running away, or displaying other signs of wanting to be left alone. If you treat your guinea pig with care and respect, then the likelihood that your guinea pigs vibrations are those of happiness will be greatly enhanced.

If you’re looking to get your chinchilla the best and most comfortable hammock then we’re here to help. We’ve compiled a list of the top five best chinchilla hammocks that will be perfect for any size chinchilla.   Best Chinchilla Hammock Image Name Rating Shop Emours Small Animal Warmly Hanging Bed VIEW PRICE Hideout Starter […]

With so many cute and cuddly critters to choose from, it can be tough to decide which one is right for your family. But don’t worry, we’ve got you covered. Here’s a look at some of the best small pets for toddlers.   Best Small Pets for Toddlers     Is A Rabbit A Good […]

Guinea Pig Cage Size A good rule of thumb is that a guinea pig cage should have at least 3.75 square feet of living space per guinea pig. You can use the guinea pig cage calculator on this page to figure out how large of a cage you’ll need if you plan on keeping […]