Can Bearded Dragons Eat Earthworms? Bearded dragons can eat earthworms, but it’s not advisable to feed your bearded dragon earthworms. Also, it’s never a good idea to feed a bearded dragon insects that you’ve collected from the wild or your backyard.

You can continue reading this article to learn more about why you shouldn’t feed your bearded dragon earthworms.

And you can find some good earthworm alternatives that are safe for bearded dragons if you scroll a little further down this page.

Avoid The No.1 Cause Of Death of Bearded Dragons in Captivity (Learn More)

Earthworms might seem like a harmless treat for your bearded dragon, but they harbor a wide range of parasites like Protozoa, Platyhelminths, and Nematodes. These microscopic organisms can damage a bearded dragon’s intestines, and in some cases, they can cause severe illnesses that can lead to a bearded dragon’s death.

Earthworms harvested from the wild may also be contaminated with pesticides that can harm a bearded dragon’s liver and make them extremely sick.

Some Bearded dragons won’t even consider eating an earthworm since they are covered in slime, and they also have an unpalatable texture. That means in most cases a bearded dragon will just ignore any earthworms you put in their habitat unless they are very food motivated or extremely hungry.

Nightcrawler is just another name for any earthworm that’s part of the Clitellata, Oligochaeta, and phylum Annelid order of invertebrates. Since nightcrawlers are just earthworms going by a different name they carry the same risk of contamination and parasitic infections.

Bait worms or angleworms are just earthworms sold at bait and tackle shops for the purpose of catching fish. These worms are usually harvested from the wild, and then they are sold to the bait stores in bulk.

That means bait worms carry all the same parasites as any other earthworm, and since they are kept in large groups in unsanitary conditions they pose an even greater risk to a bearded dragon’s health.

No, bearded dragons shouldn’t eat red worms since they can pose more health risks than common earthworms. They are also even more unpalatable than regular earthworms. And you probably don’t want your bearded dragon eating them since their scientific name roughly translates to “foul-smelling”

Redworms (Eisenia fetida) are a different species of a worm than the common earthworms you can find crawling around in the dirt in your yard. They are also known as the red wiggler worm and they primarily consume decaying organic matter.

Red worms carry all the same parasites as common earthworms, and since they live in rotting organic matter they also harbor more bacteria in their intestines. And to top it all off they exude a pungent foul-smelling liquid when handled roughly as a way to ward off predators.

Can Bearded Dragons Eat Worms From Outside

You should never feed your bearded dragon earthworms from outside. This also goes for any insects since you can’t be sure if they have been contaminated with toxic chemicals like pesticides, fertilizers, or any other industrial pollutants.

Wild-caught insects also pose a greater risk of harboring parasites and dangerous bacteria that can make your bearded dragon sick.

That’s why it’s always a good idea to only feed your bearded dragon captive bred and raised feeder insects. These insects are usually raised in more sanitary conditions, and they aren’t exposed to all the parasites and bacteria that are out in the wild.

Feeder insects also have better diets, and they are usually gut loaded with important nutrients that reptiles need like calcium.

If you want to breed your own insects you can learn more about raising feeder insects in this eBook and Video Course: Complete Insect Breeding Manual (Click Here)

Mealworms (Buy Online) are a great alternative to earthworms for a bearded dragon. Mealworms are a very popular feeder insect and most bearded dragons prefer them over crickets.

Mealworms also have a richer nutritional profile in comparison to crickets, and they are a great source of calories for an underweight bearded dragon.

Mealworms do contain a little more fat than most feeder insects, which makes them great if you need to fatten up a skinny bearded dragon. However, if your bearded dragon is already overweight then you might want to avoid feeding them mealworms. 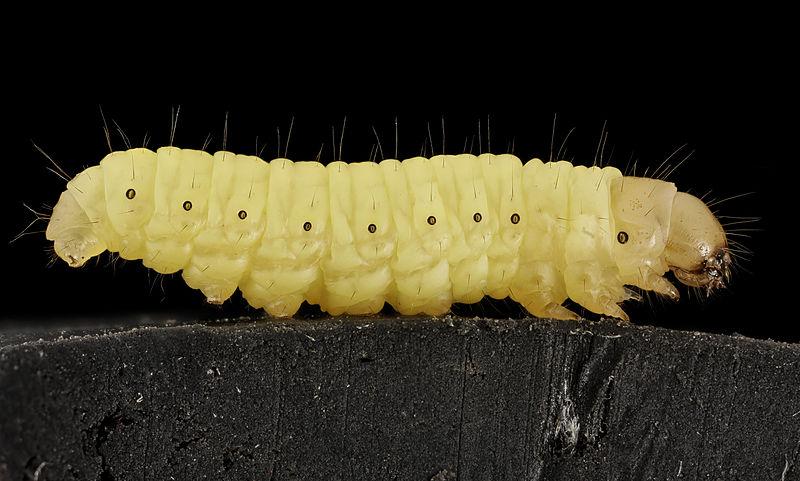 Waxworms can be hard to find at local pet stores, but you can purchase them online at Amazon.com.

Butterworms (Buy Online) are another high-fat worm that will put earthworms to shame. These thick “worms” are actually caterpillars and they are captive-raised, so they are completely safe for a bearded dragon to eat. They contain 6.2% protein and 5% fat. They are also a good source of calcium since they contain 43 mg of calcium for every 100g of live butterworms.

Crickets (Buy Online) should serve as a staple food in any bearded dragons diet. They are nutritionally similar to the insects a bearded dragon would eat in the wild, and they are very active so they should stimulate your bearded dragon’s natural prey drive

Crickets are a very good source of nutrition for a bearded dragon, and you can even fortify them with vitamins and minerals. Supplements like Repashy SuperLoad (Buy Online) make it easy to “gut load” crickets, and there are lots of different cricket foods that you can use to raise crickets to boost their nutritional value.

Crickets have a 20% protein content, and a 6.8% fat content, which makes them a good high protein feeder insect with a small amount of fat.

Live Dubia Roaches (Buy Online) are an excellent substitute for crickets in a bearded dragon diet. Dubia roaches don’t make noise unlike crickets, and they are very easy to breed in captivity compared to crickets.

If you can’t find Dubia Roaches in your local pet store you can buy them on Amazon.com and have them delivered.

There are lots of different types of worms that all fall under the informal earthworm moniker, and you can find earthworms on almost every continent.

Earthworms aren’t toxic to bearded dragons since they don’t produce any natural poisons.

However, earthworms do harbor parasites and bacteria that can cause diarrhea and severe illness.

Do Bearded Dragons Eat Earthworms In The Wild? 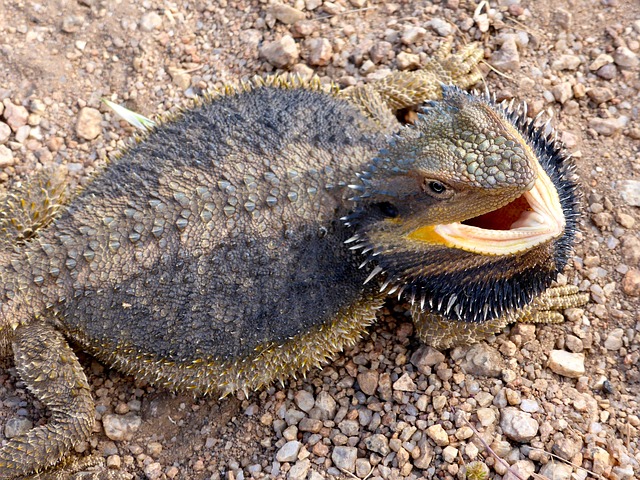 Bearded dragons are native to central Australia where they live in extremely dry deserts. Earthworms aren’t commonly found in these habitats, so it’s very unlikely that they would be part of a bearded dragon’s natural diet.

In the wild bearded dragons primarily feed on insects with hard exoskeletons that are adapted to living in hot climates with very little rainfall.

To best mimic a bearded dragon’s natural diet you can offer them a mix of insects like mealworms, crickets, and dubia roaches. You can also feed them leafy green vegetables since bearded dragons eat plants in the wild as a source of nutrition, and for their moisture content. 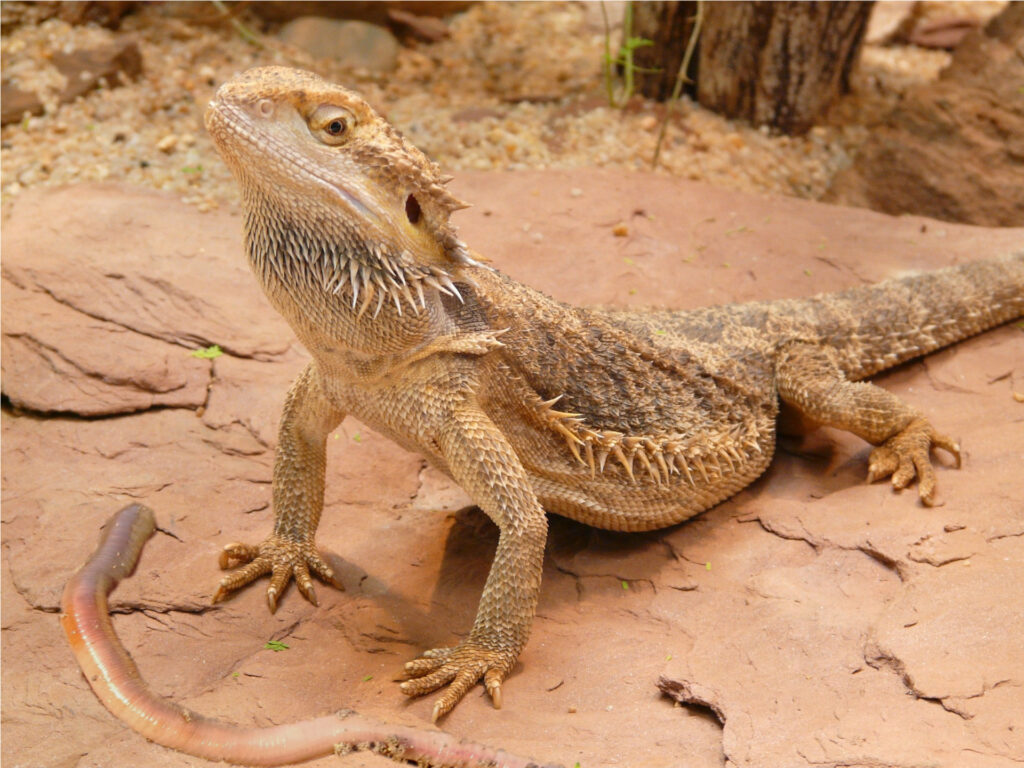 Thankfully most bearded dragons don’t even like earthworms since they have a slimy body and an unpalatable texture.

Earthworms also exude chemicals in their mucus that taste bad, and in the case of red worms smell bad as well.

Some bearded dragons might ignore the bad taste of the mucus if they are hungry, but for the most part, they won’t enjoy eating earthworms as much as other more appropriate feeder insects

Are Earthworms Good For Bearded Dragons

Earthworms have a very high moisture content and they are 70% to 90% water depending on the species of worm, and the amount of water in their environment.

Most earthworms are also a good source of several minerals like iron, calcium, potassium, zinc, copper, and magnesium. And they tend to accumulate more of these minerals if they live in mineral-rich soils.

Earthworms can grow to be larger than most common feeder insects for bearded dragons with the exception of Hornworms.

But bearded dragons can experience impaction if they eat earthworms especially if they swallow them whole. This blockage in their intestines can at best lead to constipation, and at worst it can lead to serious health problems.

It’s not a good idea to feed a bearded dragon anything you’ve collected from the wild or from your own yard.

Insects you collect this way might be contaminated with pesticides, fertilizers, and other dangerous substances and pollution from cars.

Worms accumulate these substances more readily than most other insects since their body is very permeable, and they also pass contaminated soil through their body

Earthworms carry many different kinds of parasites, some of which include

If a bearded dragon eats a parasite infested worm they will usually get infected with the parasites.

When a bearded dragon is infested with a large number of parasites they can start to have trouble digesting food and absorbing nutrients. They can also suffer from a depressed immune system, and they will exhibit signs of lethargy and overall declining health.

If a bearded dragon acquires a parasitic infection from eating an earthworm they will need to be taken to a veterinarian for treatment. These treatments can be expensive, and the treatments don’t always work, so it’s best to avoid feeding your bearded dragon earthworms all together. 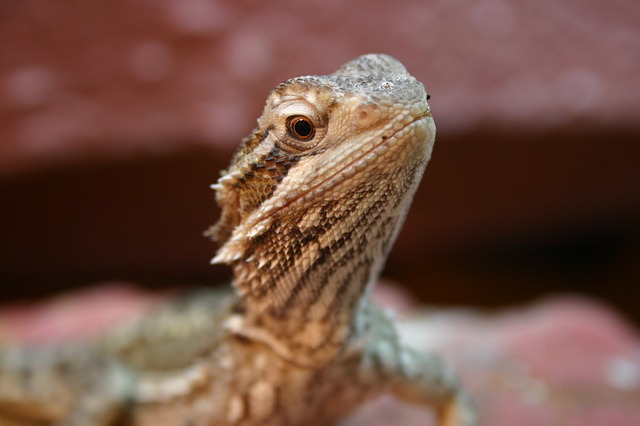 However, baby bearded dragons need to be fed smaller insects and nymphs to limit the risk of them choking, and to avoid intestinal blockages.

A baby bearded dragon should only eat insects that are no bigger than the space between their eyes so that basically rules out earthworms since they are way too large.

If you’re looking for the best heat lamp for Iguanas, you either are looking to get one for a new iguana enclosure, or you might be having trouble finding a heat lamp that is powerful enough to keep your iguana warm in their large habitat. No matter what situation you might find yourself in, the […]

Can Leopard Geckos Eat Hornworms? Yes, leopard geckos can eat hornworms. Hornworms make a great leopard gecko treat, and they are soft and full of moisture which makes them very easy to eat. It’s a good idea to only feed full-size hornworms to adult leopard geckos since they can be a little too large for […]

Do Corn Snakes Need UVB? Corn snakes don’t need a lot of UVB light to utilize calcium in their diet. However, it’s still a good idea to have a UVB light in a corn snakes enclosure for their overall health and well being and to mimic their natural environment. Keep reading this article to learn […]