If you are looking for the best pet birds that talk. There are a wide selection of birds that can fit into any home or budget. The following species are well known for their speaking prowess. 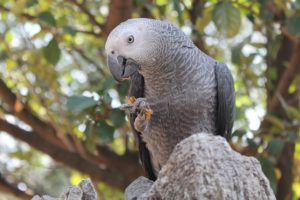 The African parrot is regarded as one of the most intelligent talking bird species. African parrots are native to sub-Sahara Africa, Madagascar, and the Arabian Peninsula. Most members of this species have predominantly green plumage with gray feathers on their head and other parts of their body. 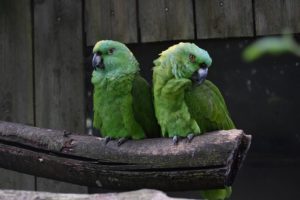 Amazon parrots are a large group of parrots that are native to America, Mexico, and the Caribbean. Most Amazon parrots have green plumage with yellow, red or blue accents on their heads and body. They are known to live very long lives with a life expectancy of 60 to 100 years. Most members of this species can be trained to talk, and they are able to mimic not only words but vocal tone as well. 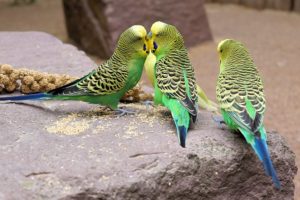 Parakeets are a small bird native to the dry interior deserts of Australia. Parakeets in their native environment are mostly green, with a yellow head and some gray accents on their feathers. 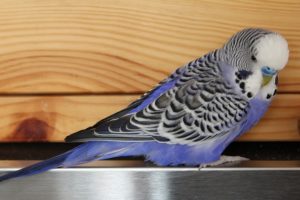 Other color variations have been bred in captivity and they are mostly blue and gray. Parakeets have a lifespan of 5 to 8 years, though some have been known to live up to 15-20 years. Even though parakeets are not the best talkers, they are considered one of the best talking birds for beginners. 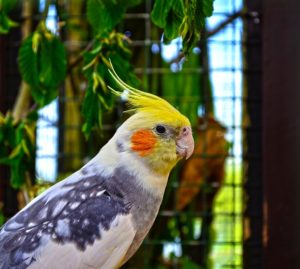 The Cockatiel is native to Australia where it is mostly found in wetland and bush habitats. Cockatiels are mostly gray with a yellow head and red cheeks. The most noticeable feature on a cockatiel is the prominent crest on its head. The crest can be used to assess the emotional state of the bird. When the bird is alert the crest is raised if the crest is flattened the bird is angry or defensive.

Cockatiels have a life expectancy of 15 to 25 years, with some cockatiels living as long as 30 years.They are good talkers, but if you really want to ensure you get a Cockatiel to talk, get a male since they are easier to train than females.

Parakeets are one of the most popular and easy to care for pet birds. There are a number of things that make the parakeet the best talking bird to keep as a pet. One of the most important things especially for beginner bird owners is price. Parakeets are very affordable and can usually be purchased for less than 30 dollars.

Another thing that makes a parakeet a good talking bird is the limited amount of noise they make. Unlike some of the other talking bird species, a parakeet doesn’t make extremely loud noises, which makes them well suited for almost any kind of living arrangement.

The only real downside with a parakeets talking ability, is their voice tends to be a little soft and has a lower volume than other talking birds. But this is a fair trade-off for having an overall quieter bird that is easy to live with when it’s not talking. 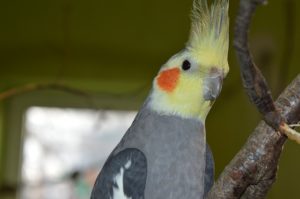 The cockatiel is another very popular pet bird, second only in popularity to the parakeet. Cockatiels like parakeets are relatively easy to train to talk. Cockatiels are also a quiet bird that will fit into most households. While cockatiels are still a relatively inexpensive bird, they do cost around one hundred dollars. This price is a little more than a parakeet, so it could be on the high side of a beginners price range.

Another way to increase your odds of teaching a cockatiel to talk is to buy a very young baby bird that was hand fed by humans. A cockatiel that was raised by its mother will be harder to train to talk, and they will be less friendly to people in general. 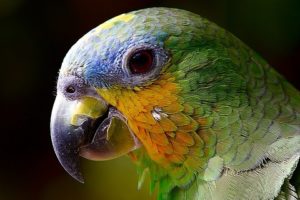 The Blue-Fronted Amazon parrot is a perfect talking bird for more experienced bird owners. Blue-Fronted Parrots has an extraordinarily long lifespan and can live up to 100 years. The Blue-Fronted parrot is also a very loud and vocal bird and may not be well suited for many living arrangements.

Amazon parrots are quite expensive and cost anywhere from one thousand to two thousand dollars, putting them out of most peoples price range. They will also require larger cages with lots of things to do, in order to keep their stress levels in check.

If you are ready to care for a Blue-Fronted Parrot they will reward you with their excellent speaking ability. A Blue-Fronted Parrot is able to learn hundreds of words, and they speak with a very loud and clear voice. They can also mimic a persons tone of voice so they sound less like a bird, and more like a human when they talk. 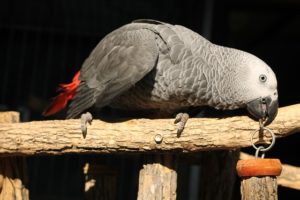 The African Gray Parrot is considered to be one of the best talking birds available. African gray parrots are a good choice for an experienced bird owner. The African gray is one of the more costly birds with a price well above two thousand dollars.

An African gray will have a long life and can live up to 60 years. And they will need a large cage and nearly constant stimulation. Since they are one of the smartest birds they can easily get bored with their environment. If that happens it’s not uncommon for them to become stressed and pluck out all of their feathers.

If you can provide a suitable environment and are willing to make a life long commitment. The African Gray will reward you with the most advanced talking abilities of any bird on earth.

The African Grays speaking ability is so prodigious they are used by scientists to study intelligence and language comprehension. African grays will not only repeat and mimic words they hear, they seem to understand their context as well.

African Grays can even string together short sentences and make requests based on their needs. In laboratory conditions, they have even been trained to do simple mathematics. With proper care and training the sky truly is the limit when it comes to the African grays potential.

Getting a Talking Bird 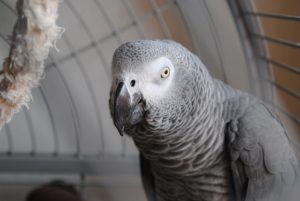 Anyone who is looking for the best pet bird that can talk should consider some of the downsides and upsides of owning a talking bird. Talking bird species, in particular, can be very noisy, and are known to scream and make loud vocalizations at all times of the day. If you live in an apartment, or with other people that might be bothered by such loud noises. Then keeping certain species of talking birds will have to be avoided.

Talking birds also tend to be very intelligent, which could lead to stress-related problems if they are not properly stimulated. In order to keep a talking bird happy and healthy, you will need to provide an enriched environment. And the bird will have to be handled regularly.

This means you will have to provide a large enough cage with lots of toys and other activities for the bird to engage in. Even adding a second bird for companionship will help prevent a talking bird from becoming overly stressed. 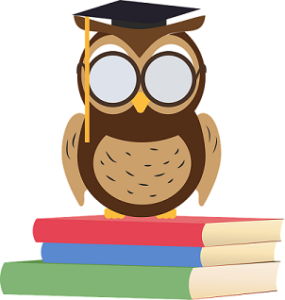 Another thing is that even if a species of bird is known for its ability to talk, that doesn’t mean that any individual will be able to talk. As with humans, each bird is different, while some birds will easily learn how to talk, some will never talk at all.

If you want to guarantee that you are getting a talking bird, find one that has already been trained to talk. Bird rescue organizations and certain pet stores will have a few birds that are already able to talk. If you want to bypass the long process of training a bird to talk, try finding a bird that can already talk, this can save you a lot of time and effort.

If you are going to start from scratch and train a baby bird how to talk, you will need to follow proper training techniques. Even the best talking bird species will require constant training to achieve their full potential. 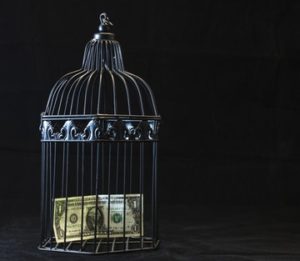 Bird species that are known to be the best talkers tend to be expensive. Some birds can cost thousands of dollars, putting them out of reach for a beginner bird owner. Another thing to always keep in mind is that buying a bird can be a life long commitment. Since some species of talking birds can live up to 100 years.

When choosing a bird, it’s ability to talk should only be one of many factors to take into account. Birds can make wonderful pets, just be sure to choose the species that best fits your lifestyle and a bird that you can give the best home to for its entire life.

What are Bird Years? Bird years are a way of converting your pet birds real age into human equivalent years. Bird years are similar to dog or cat years, but since there are so many different bird species the calculation can be a little tricky. That’s why we created the bird age calculator […]

Do Parakeets do Better in Pairs

For anyone who feels their parakeet could use some companionship, then getting another parakeet is a great option. For the most part, parakeets do better in pairs, but you will still have to be aware of a few key facts to have a successful pairing. Geo Bird Cage (Watch Video) As with most birds, parakeets […]

Finding the best food for Amazon parrots is extremely important if you want to keep your feathered friend healthy and active. That’s because Amazon parrots need to eat a diet that contains a very specific blend of macronutrients along with essential vitamins and minerals. If you’re interested in our top pick them we recommend LAFEBER’S […]