The following list of the Top 20 Dumbest Dog Breeds is based on a dog’s ability to learn new commands and follow orders.

Even though the dogs on this list don’t excel at obedience training that doesn’t mean they can’t be cunning and clever.

Most of these dogs still have unique abilities that don’t lend themselves to an obedience-based interpretation of intelligence.

The Afghan Hound is a reserved dog that can come off as aloof or lacking in intelligence. They also have a strong independent streak, which can make obedience training a challenge.

Afghan Hounds were originally bred to flush-out and chase small game in harsh arid landscapes. This prey drive is so deeply ingrained in them that they can break off into a high-speed chase and ignore the commands of their owner if they see a small animal.

Basenji are extremely energetic dogs that can be a real handful. They are a “catlike” dog which makes it hard to form a bond with them since they are very independent. However, they still can be trained, but they do have a very short attention span, so it’s a good idea to limit training sessions to around 10 to 15-minutes.

Bulldogs are a friendly and outgoing dog, but they can have a one-track mind that can make them seem less intelligent. They love using their strong jaws to destroy things and get into trouble. They also can become overprotective and aggressive if they aren’t properly socialized as puppies.

A Chow Chow is a strong-willed dog with a stubborn streak that can make it hard for most owners to control them. They need lots of positive reinforcement training with constant repetition to learn new commands. They also don’t respond well to harsh training methods, so they require an owner that has plenty of patience.

The Borzoi is a hunting dog that needs lots of training to ensure they are properly socialized and well-adjusted. They can be very stubborn dogs that don’t follow commands, but they are generally well mannered and gentle around humans.

Borzoi can exhibit an unstoppable prey drive around small animals, so they should always be kept on a leash during walks since they are prone to bolting.

Bloodhounds are alert dogs that have a one-track mind that makes them one of the world’s best scent dogs. They are relatively easy to train as puppies as long as you focus on training techniques that take full advantage of their strong sense of smell.

As Bloodhounds get older they can become more stubborn and harder to train, so it’s very important to form a strong bond with them when they are puppies. They also need a firm master since they won’t follow orders from people they see as pushovers.

The Pekingese is an independent dog that lives up to their royal heritage with their independent temperament. They don’t like following commands, but they are very loving and protective of their owners.

Pekingese make decent watchdogs since they bark at every little noise they hear. They also are a little high strung, and they can be hard to control for owners that aren’t assertive.

Beagles are strong-willed hunting dogs that were bred to lead a fox hunt. They can be a little bit of a challenge to train, but they will learn new commands with plenty of patience and positive reinforcement. They do have a very strong prey drive, so you need to be careful when an untrained Beagle is around small animals.

Basset Hounds were bred to be superior scent hounds, but they don’t follow commands very well, and they can be very aloof and stubborn. Their droopy face and eyes also make them look slow and dimwitted, but they can still be trained if you start early when they are puppies.

Basset Hounds respond well to treat based rewards, and they need lots of consistent repetition and persistence to get the most out of the training process.

Shih Tzu’s are a cute little lap dog, but they can be a real challenge for their owners. They are hard to train since they are a very energetic dog. This boundless energy can make it impossible to get them to settle down and focus. In most cases, it’s a good idea to start training them as early as possible, so they don’t become overly aggressive and overprotective.

A Bullmastiff is a large breed strong-willed dog that can be a real handful for some owners. They need early training as puppies to ensure they are obedient and properly socialized.

They need vigorous daily exercise,  and they will excel in agility training and scent tracking. Bullmastiffs also have a strong desire to protect their owners, but this can lead to them becoming overly aggressive towards other dogs and strangers.

The Lhasa Apso is known to be willful and hard to train. They aren’t dumb, but they aren’t an easy dog to train unless you put in a lot of effort.

Lhasa Apso are also extremely stubborn which can be very frustrating for their owner. However, with consistent positive reinforcement and consistent training, they can become an obedient well-behaved companion.

The Chihuahua is an alert dog, but they can be a little slow to learn and they are very skittish. They respond best to gentle positive reinforcement training, and they need a lot of repetition to learn commands and follow orders.

The Chihuahua’s small size also tends to fool people into letting them get away with a lot of bad behavior, but it’s very important to be firm with them if they are misbehaving.

The Bull Terrier has the energy of a terrier with the stubbornness and strength of a Bulldog. That makes them very independent dogs that can get into a lot of mischief if you’re not careful. That high energy disposition also makes it hard to properly train them and keep them focused.

Bull Terrier’s do best in an environment where they can burn off their boundless energy. They excel at agility training, cart pulling, and other physically demanding tasks.

The Saint Bernard was bred to be a herding dog, and they also served as search and rescue dogs in the Swiss Alps. That made them a strong-willed dog that can function alone for extended periods. But that breeding also made them a little hard to train and manage in a domestic setting.

Saint Bernard’s will need to be actively socialized and trained at an early age so they learn to follow commands, which will ensure they don’t exhibit behavioral problems as they get older.

The Great Pyrenees is another mountain dog that was bred to protect flocks of sheep with minimal human interaction. They have a very independent temperament that can make it hard to teach them simple commands like sit, stay, heel, etc.

That doesn’t mean that the Great Pyrenees can’t learn commands, it just means they aren’t as quick to learn, and they need lots of positive reinforcement. 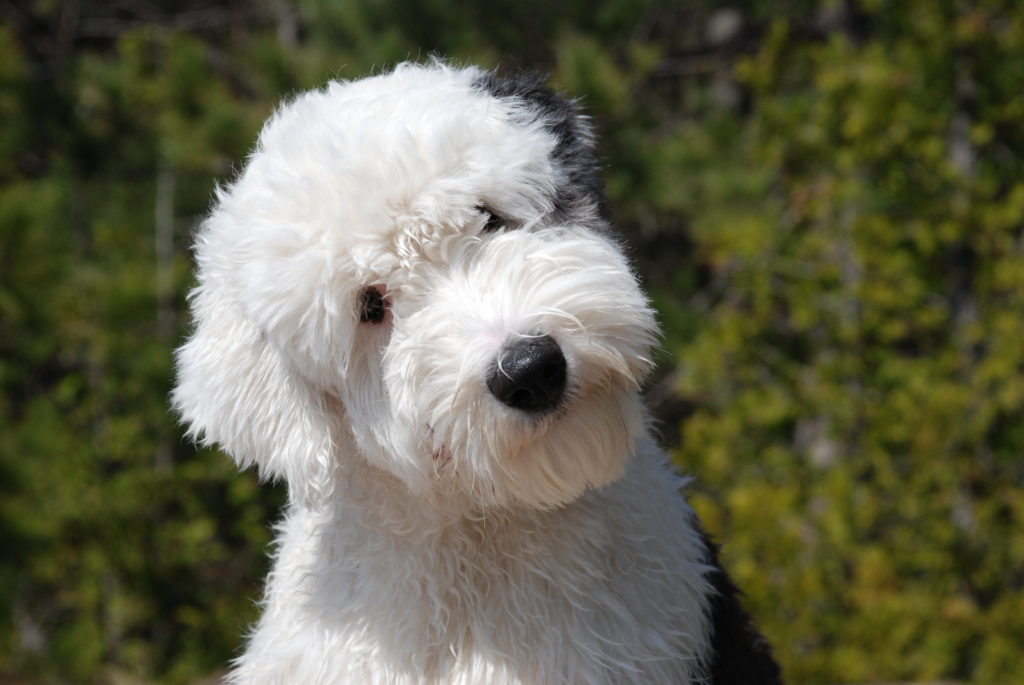 The Old English Sheepdog is a classic herding dog that will need to engage their instincts to show their true intelligence. They get bored very easily, and they don’t do well with standard obedience training. They prefer to be outside in nature tending to their flock, so it’s best to train them in a way that keeps them both physically and mentally active.

The Lakeland Terrier has the energy and mind of a typical terrier. They were bred to protect a farmer’s sheep from foxes, so they have a very strong prey drive. That means they can be hard to control around other small dogs and animals. They actually learn quickly, but they get bored very fast, so they don’t do well with repetitive tasks or with standard obedience training.

Chinese Crested dogs are loving animals that make great pets, but they have a delicate nature that can make them hard to train. They respond well to gentle positive reinforcement, but they will quickly ignore your commands if they feel as though you are becoming frustrated or aggressive.

The Italian Greyhound is a timid dog that has a very skittish nature. They are always alert to danger, and they don’t respond well to overly aggressive training. Food-based rewards and treats work best when training them along with lots of walking and running based exercises.

The Italian Greyhound does best with people that can offer lots of praise and physical affection. Italian Greyhound’s become easier to train once they trust you, but they will need consistent training to keep their focus and attention.

If you’re looking for gifts for Weimaraner owners you’ve come to the right place. On this page, you’ll find a full selection of Weimaraner gifts that are perfect for birthdays, holidays, or for any other gift-giving occasion.   Table of Contents Weimaraner GiftsBlessLiving Fuzzy Dog Weimaraner BlanketDouglas Cassie Weimaraner PlushWeimaraner Dog NecklaceThe Metal Peddler Weimaraner […]

Do Pitbulls Need Coats in the Winter? Often, people think that pit bulls don’t need protection from the cold in winter because they have a fur coat. However, pit bulls can still get very cold, and they need coats just like any other short-haired dog. There are many different types of coats that are available […]

French Bulldogs may be small but they need plenty of physical and mental stimulation to be happy. To help you find some fun dog toy ideas we’ve rounded up some of the best toys for French Bulldogs so you can show your Frenchie just how much you love them with these new playthings.   Table […]